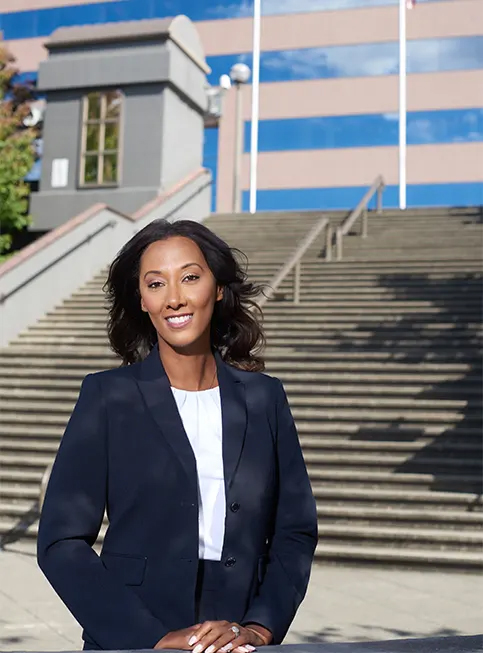 Member
Jul 2011 – Present
The Mission of the American Association for Justice is to promote a fair and effective justice system and to support the work of attorneys in their efforts to ensure that any person who is injured by the misconduct or negligence of others can obtain justice in America’s courtrooms, even when taking on the most powerful interests.

Amicus Committee Chair; Board Member
Jan 2014 – Present
OneAmerica advances the fundamental principles of democracy and justice at the local, state and national levels by building power within immigrant communities in collaboration with key allies.

Board Secretary
Jun 2011 – 2015
A college preparatory school located in Addis Ababa, Ethiopia, which aims to offer an education that inspires, nurtures and develops young women and men to be leaders in their communities, in Ethiopia and beyond.

Niomi was born and spent her early years in Addis Ababa, Ethiopia before her parents emigrated to the United States. Her parents instilled the values of freedom and justice into their children at a young age, leading her to her life’s career.

Niomi earned her Bachelor of Arts in Political Science from Washington State University, and accepted a Dean’s Merit Scholarship to DePaul University College of Law in Chicago, Illinois. While in Chicago, Niomi worked for a criminal defense and civil rights firm defending victims of gross injustices. In her third year of law school, Niomi was selected to join the Justice Center for Capital Defense where she helped represent death row inmates as well as defendants charged in high-profile capital cases.

Nearly a decade ago, Niomi returned to Seattle to work for a well-known personal injury law firm, representing people who suffered catastrophic injuries. Niomi opened her own firm, Fisseha Drake PLLC, several years ago, and devotes her practice to helping those seriously injured in medical malpractice cases, maritime and motor vehicle collisions.

She takes great pride and responsibility in aggressively advocating for her clients against
large corporations and insurance companies.

Niomi is admitted to practice in Illinois and Washington, and in the U.S. District Court for the Western District of Washington. Niomi has repeatedly been selected as a “Rising Star” by both Washington Super Lawyers and Illinois Super Lawyers between 2015-2020.

She is a member of the Washington State Association for Justice, where she currently serves on the Board of Governors and the Awards Committee. Previously, she served as Chair of the Diversity Committee and on the Board of WSAJ’s Political Action Committee. Niomi is an active member of her community and volunteers with numerous organizations in the Seattle area. She is a former Board Member of OneAmerica, the largest immigrant and refugee rights organization in the northwest, and is an active volunteer at the Ethiopian Community Center in Seattle.